At $1.52 trillion outstanding, student loan debt is now the second largest form of consumer debt in the United States, behind only residential mortgages. This growth has been particularly pronounced among young borrowers. Between 2005 and 2014, average real student loan debt per capita for individuals aged 24 to 32 doubled from $5,000 to $10,000, quickly reshaping the debt profile of American consumers. Unsurprisingly, some have pointed to the increase in student loan debt over the past few decades to explain the decline in homeownership among young adults. During the ten-year period from 2005 to 2014, homeownership in the U.S. fell 4%. Among young adults, this figure was 9%. Given the multitude of negative factors affecting the housing market in the decade after 2005, separating out the effect of student loan debt proves to be a difficult but valuable analysis. In this piece we will attempt to examine the many impacts of student debt on the U.S. housing and structured credit markets, with a focus on potential government interventions to mitigate the negative effects of the debt.

While it may seem somewhat counterintuitive at first, individuals with student loan debt actually have higher homeownership rates than those non-college graduates without any debt. Once past their early twenties, individuals with student loan debt have a higher home ownership rate at every point in their lives than those who never attended college. This is because, by and large, college still remains a good investment. A typical college graduate will earn $500,000 more over their lifetime on a present value basis than a typical high school graduate.1 Compared to the average $30,000 borrowed, financing a college education is unlikely to leave a borrower far behind on earnings, and would not, on average, permanently prevent homeownership.

Comparing homeownership rates among college graduates tells a more nuanced story, though. Individuals who borrow for their education lag substantially in homeownership throughout their late twenties and early thirties relative to those who graduate with no debt. In fact, the Federal Reserve estimates that a $1,000 increase in student loan debt causes a 1 to 2 percentage point drop in homeownership rates during the borrower’s late twenties and early thirties. Put differently, over 400,000 young individuals who might have otherwise owned a home in 2014 did not due to incremental increases in student loan debt. Although this figure points towards the conclusion that student loans have seriously dampened housing demand, we believe this decline in homeownership is a timing issue, rather than a structural change to the economy. Instead of preventing individuals from purchasing homes, student loan debt seems to create a lag in demand, pushing first time home purchases later into adulthood. Fortunately for the housing market, population data suggests a significant increase in demand for home buying could be on the horizon. A large portion of millennials will soon move into the 30-34 age group, when homeownership rates tend to increase as student loan debt is paid down. 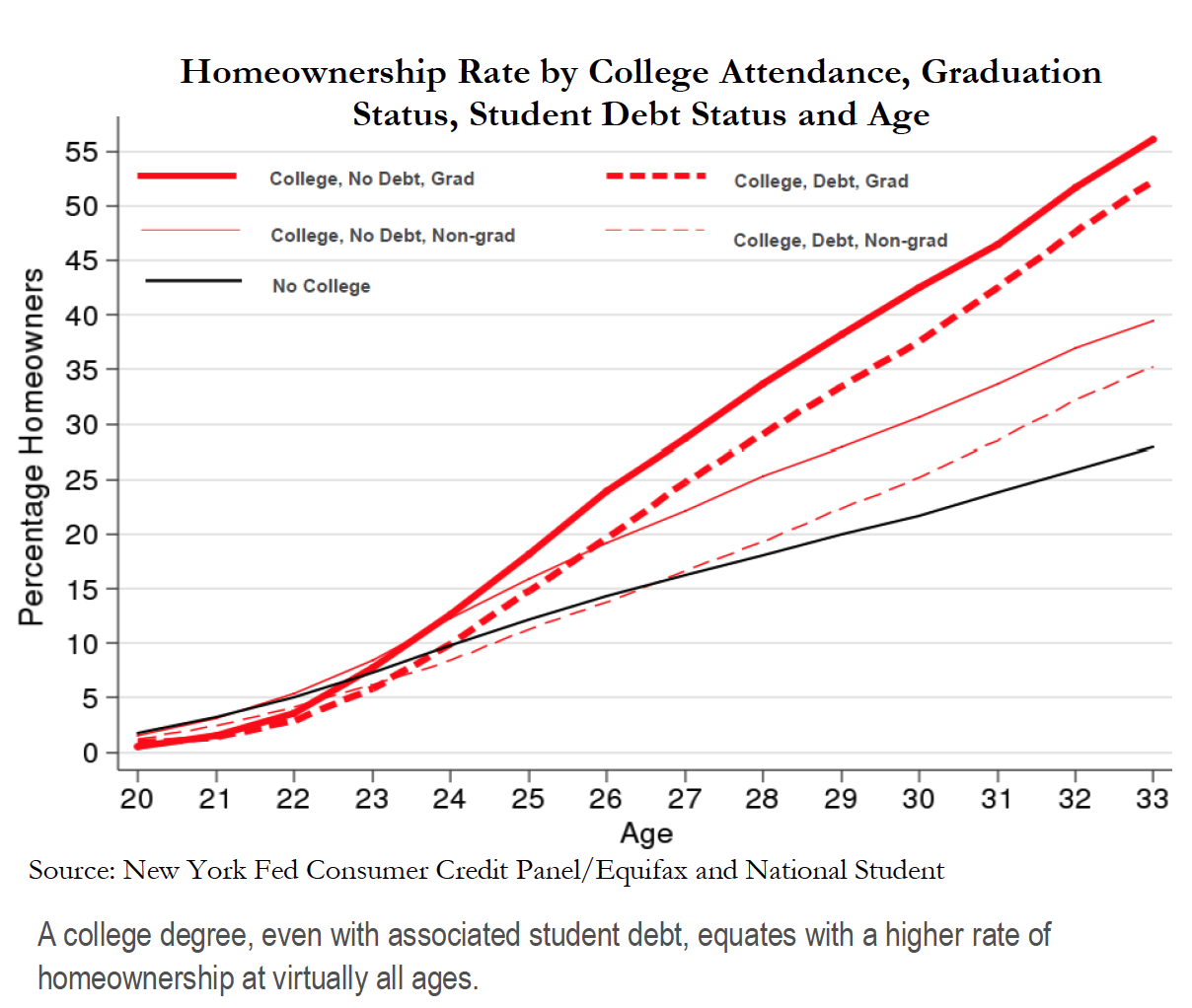 In addition to delayed homeownership, investors should be aware of the potential geographic repercussions of student loan growth. Individuals with student loan debt are more likely to leave rural areas than non-borrowers, compounding the already present issue of slow job growth and poverty in rural America. In fact, just 52% of rural student loan borrowers still live in rural areas six years after graduating, compared to 66% of non-borrowers. This problem also scales by borrowed amount, with individuals in the highest quartile of student loan debt 41% less likely to remain in rural areas than individuals in the first quartile. As loan amounts grow, so should rural to urban migration. Unfortunately, even without additional debt growth, the economics of the situation show that the migration of educated Americans out of rural communities is unlikely to slow in the immediate future. Typically, borrowers who moved from rural to metropolitan areas in recent years saw an 8.6% decrease in student loan debt one year after graduation, as compared to 3.3% for groups that stayed in rural areas. 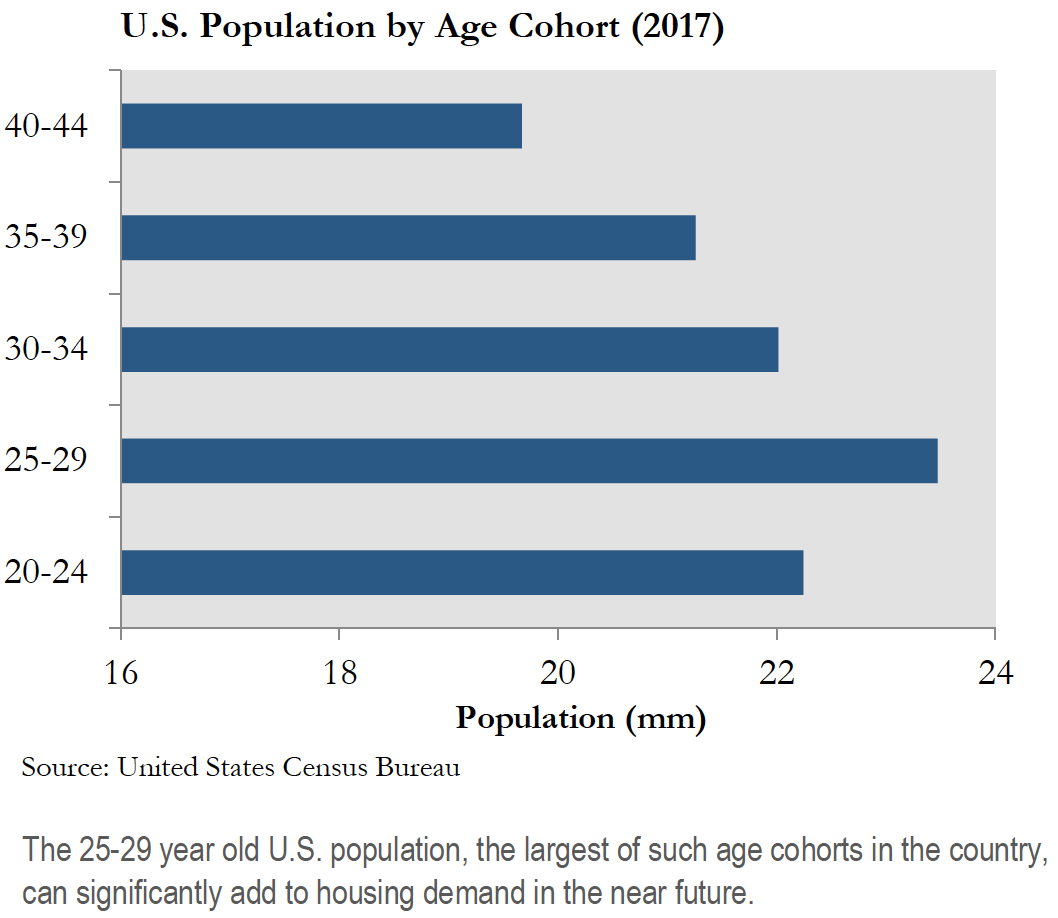 A number of states have implemented loan forgiveness programs to counteract urban migration. A few examples include the Idaho Rural Physician Incentive Program (RPIP), the Maine Dental Education Loan Repayment Program, and the West Virginia Medical Student Loan Program. These programs aim to incentivize highly educated professionals to stay in rural areas where lower pay might otherwise extend the life of debt. Although many programs exist, the reality is that few have stemmed the flight of educated Americans to urban centers so far to date.

The Federal government has also enacted legislation aimed at relieving the burden of student loan debt, with very limited success. The Public Service Loan Forgiveness program, enacted in 2007, was meant to encourage careers such as teaching, nursing, and public law. Since inception, 73,000 Americans have applied for assistance through this program, while only 864 have had their student loans forgiven. The Trump administration has recently criticized this program for unfairly rewarding certain Americans at the expense of others and news outlets have suggested the administration may seek to stop the program entirely. 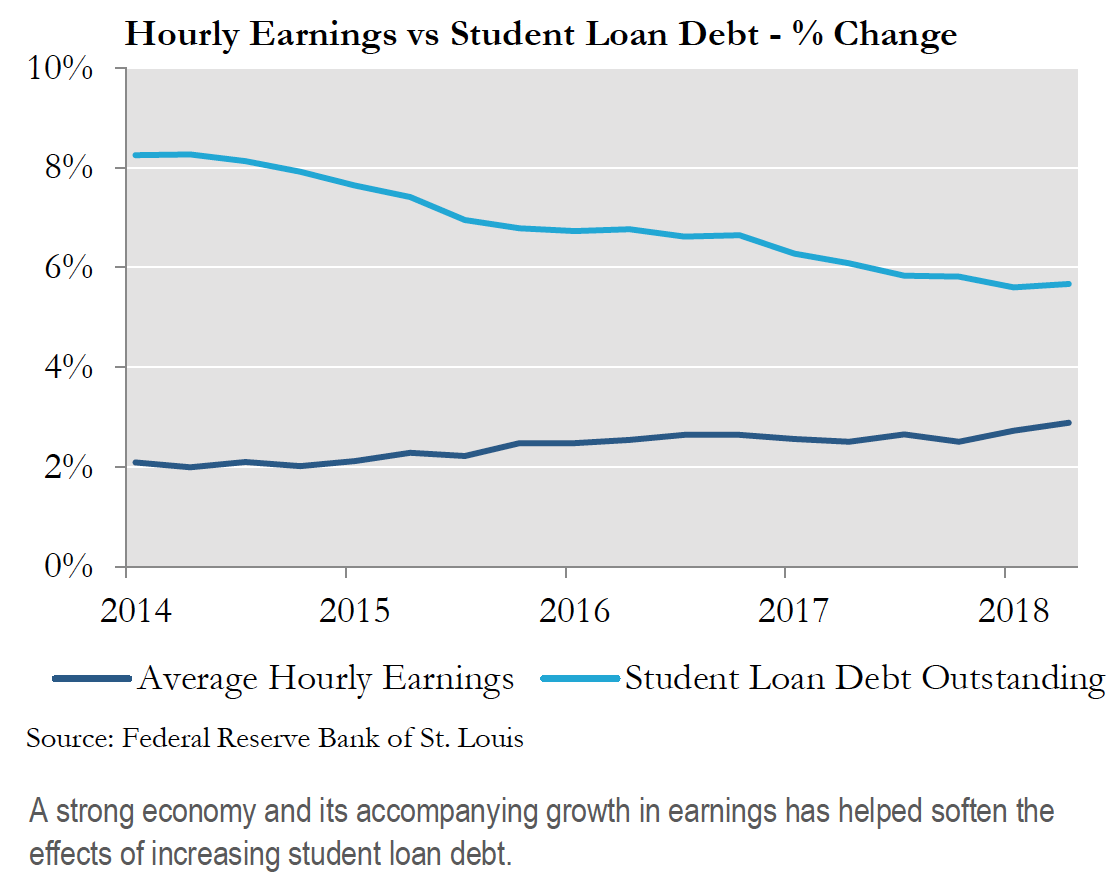 Current trends suggest the effect of student loan debt on the U.S. housing market has been relatively muted. Graduates with debt appear to be entering the housing market on a lag to graduates without debt, but at a similar rate. Population trends also point towards strong future housing demand. Though these trends are positive, they have almost exclusively occurred during a time of extraordinary economic expansion. Average hourly earnings growth has been converging on student loan growth for several years and a strong labor market has prevented high levels of default. The strength of the economy has also allowed legislators to ignore the need for reform. Current state and Federal programs focused on student debt remain underdeveloped, underutilized, and ill-prepared to handle an economic shock and increased default rates. If economic conditions were to turn south, even current debt levels could prove hazardous to homeownership rates, lessening demand from the largest cohort of prospective home buyers. This potential outcome must be closely monitored as we head deeper into the current economic cycle.