Leaving LIBOR: How Did We Get Here and What Comes Next?

The London Interbank Offered Rate, better known by its abbreviation, LIBOR, has been a key economic benchmark interest rate for decades. However, in 2017, the Financial Conduct Authority (FCA) announced it would phase out LIBOR, potentially impacting trillions of dollars of financial instruments linked to the rate, especially those in the structured credit and interest rate derivative markets. In this piece, we explore the history of events that led to LIBOR’s demise while analyzing the future landscape for its potential replacement.

LIBOR, a benchmark interest rate published daily, is the reference rate for vast quantities of financial contracts, including adjustable-rate mortgages, corporate loans, derivatives contracts, and student loans. According to the FCA, the aggregate outstanding nominal amount of LIBOR-linked instruments was $220 trillion dollars as of 2014. LIBOR is derived from surveying over a dozen large banks, averaging the rate at which each bank claims it would be able to borrow uncollateralized money across multiple maturities from other large banks. While the most commonly quoted rate is the 3-month U.S. dollar rate, LIBOR is quoted in 5 major currencies and ranges in maturity from overnight to one-year. 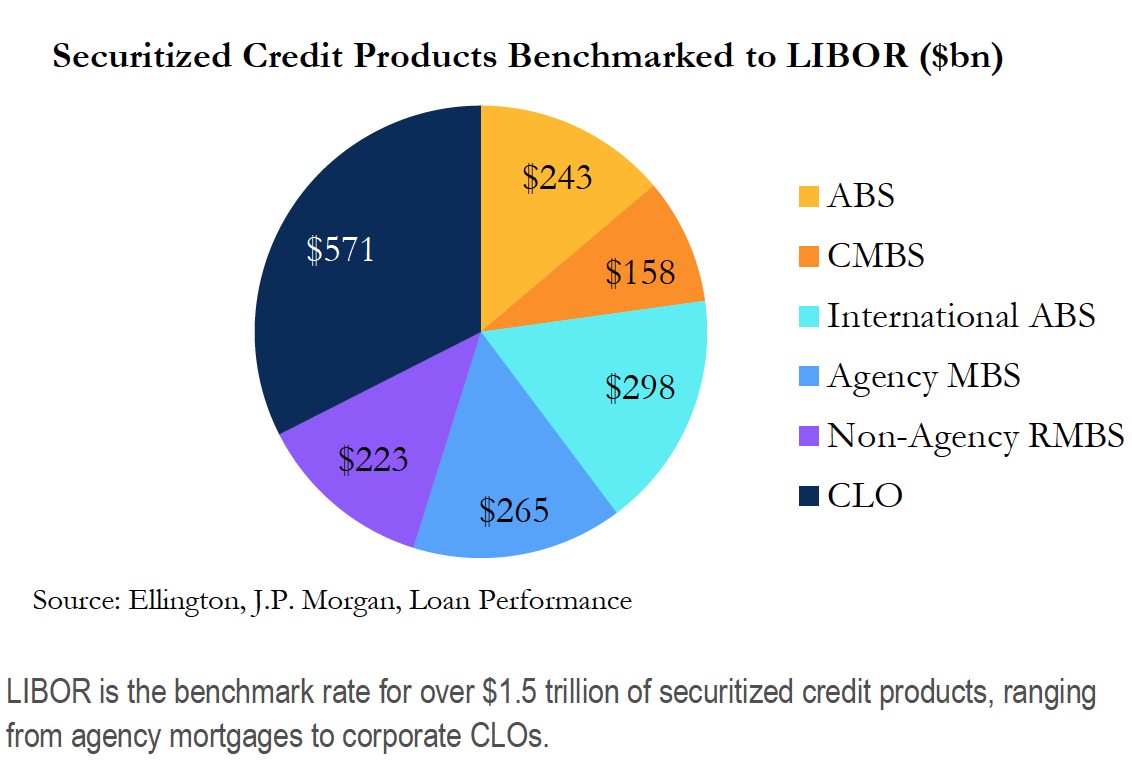 LIBOR is going away for two major reasons. From a theoretical standpoint, LIBOR is deeply flawed at the most basic level. Since LIBOR is where banks claim that they would be able to borrow money, they are deeply incentivized in times of financial stress to overestimate their own creditworthiness. By giving a true rate, banks risk broadcasting their own weakness to the world. Furthermore, because this rate is based on “expert judgment” rather than actual transactions, manipulation is relatively simple. As a result, LIBOR manipulation has triggered one of the largest financial scandals in recent history, leading to jail time for numerous traders and billions of dollars in fines for the banks that employed them while drawing the baleful ire of regulatory bodies and politicians. These regulatory bodies are charged with quashing precisely this kind of manipulation, and politicians find corrupt traders easy prey for public wrath. Although the process of replacing LIBOR has begun, it will certainly not be a quick or easy one.

While the FCA will cease to compel banks to contribute to LIBOR by the end of 2021, many see this as an optimistic estimate for a replacement rate to be completely implemented. The markets are so massive and fragmented that even if the market for the likely replacement rate is fully established by 2021, the modification of existing legacy contracts would likely extend years from there. The Intercontinental Exchange (ICE), the administrator of LIBOR, has vowed to maintain the benchmark for as long as there is demand. Banks could theoretically continue to submit rates to ICE beyond 2021; however, it is unknown if they will do so when no longer compelled and could simply decide to cease contributions in order to distance themselves from the controversial benchmark.

Outside of publishing LIBOR, ICE is not directly responsible for choosing replacements. Unfortunately, this choice falls on many different organizations across markets. For instance, the International Swaps and Derivatives Association (ISDA) will make the ultimate decision on most LIBOR-based derivative contracts, such as swaps and swaptions. Beyond ISDA’s decision-making authority on derivatives, the path to replacements becomes less clear. In the securitized products market, we see very little consistency across sectors, with the decision-making power distributed across many different groups, from the different agencies themselves (Fannie Mae, Freddie Mac, or Ginnie Mae) to the sponsor of the specific deals in some parts of the non-agency RMBS market.

Advisory groups have been organized in order to attempt to ease the transition. The Alternative Reference Rate Committee (ARRC), convened in 2014 by the Federal Reserve, has chosen the Secured Overnight Financing Rate (SOFR) as their proposed replacement for LIBOR. The ARRC has set out a year-by-year “Paced Transition Plan” (See Appendix A) to guide the implementation of this new rate so that markets are sufficiently established for a transition by 2021. Even though the ARRC does not have the power to compel any of its recommendations, their words carry a great deal of weight in a world struggling for clarity. The Structured Finance Industry Group (SFIG) has begun to make recommendations with the goal of easing the transition within structured finance. They are working to establish online tools that will allow issuers to connect with investors on outstanding deals in the structured products space.

Given many market participants believe ISDA’s plans are the furthest along and the other markets are likely to use them as a guide to transition themselves, we will turn our focus there. Currently, ISDA plans on transitioning to SOFR as the basis for the replacement for LIBOR and is operating under the assumption that SOFR markets will be fully established by 2021, as outlined in ARRC’s “Paced Transition Plan”. SOFR is an overnight rate based on transactions in the U.S. Treasury repurchase market. These transactions are struck at a rate that represents where investors borrow and lend cash to each other overnight using U.S. Treasuries as collateral. 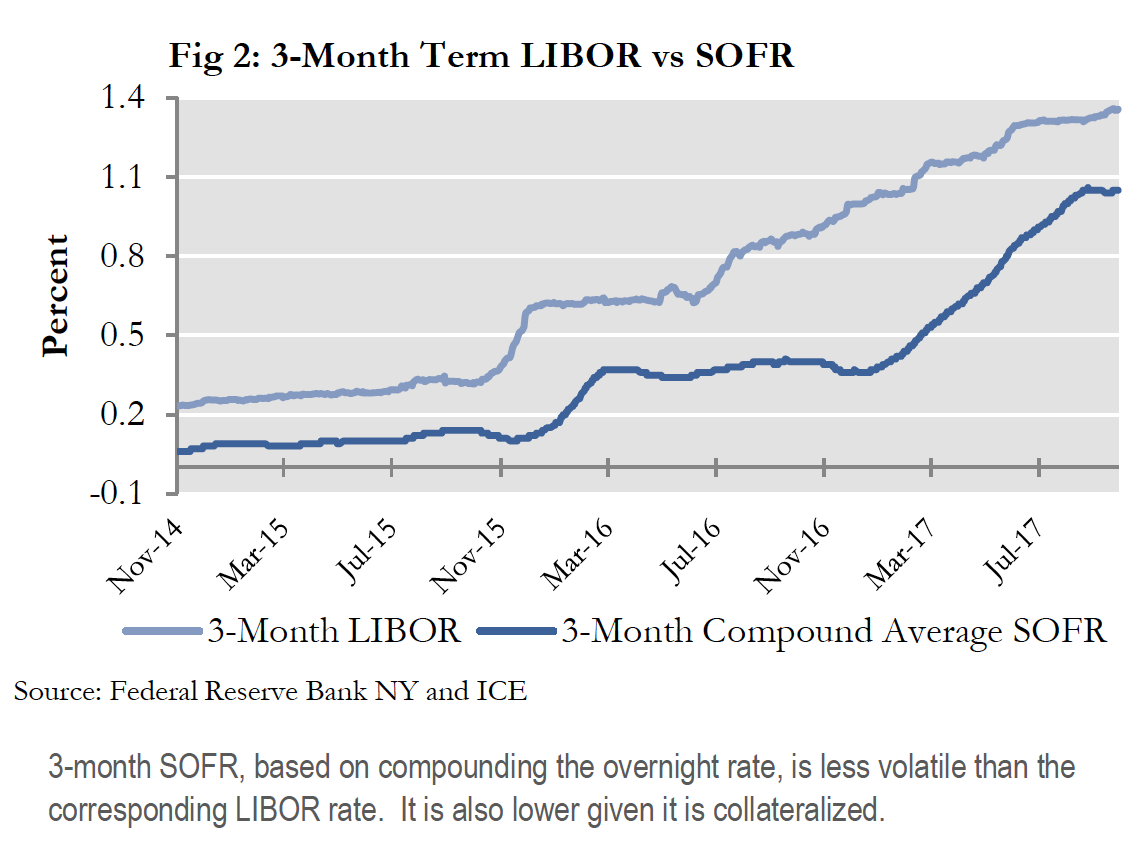 SOFR has two main fundamental differences when contrasted to LIBOR, which present problems for the ultimate rate transition. First, LIBOR is a term rate while SOFR is purely an overnight rate. ISDA is currently considering potential solutions for the lack of a SOFR-term market, leaning towards using a compounded SOFR in arrears to align with current LIBOR maturities. In the case of 3-month LIBOR, for example, the equivalent term rate replacement would be derived from the daily compounding of SOFR over the associated 3-month period, similar to how an overnight index swap (OIS) works.

The second major difference is that SOFR represents a collateralized rate, whereas LIBOR is uncollateralized, meaning the term LIBOR rate will be necessarily higher than the compounded value of SOFR over the same time period, all else being equal. In order to solve this problem, one needs to determine a spread to be added to SOFR in order to make it a closer equivalent to the uncollateralized LIBOR rate. While ISDA has proposed several ways to deal with this issue, ARRC has lobbied for a “historical mean/median” approach, which would analyze the spread between the two rates over a long look-back period to determine the spread.

What is clear at this point is that ISDA has not made any final decisions regarding LIBOR’s replacement. Even when decisions are ultimately made, these decisions will first apply to new derivative contracts on a go-forward basis. Once agreements are in place for new trades, ISDA will publish a voluntary set of protocols that can be applied to legacy contracts and both parties would need to agree to adopt said protocols. Given that the specific fallback protocol implemented will have an impact on valuation, reaching an agreement between parties could, however, prove difficult given that the fallback protocol will benefit one party to the detriment of the other.

As a part of its guiding principles, ARRC has an explicitly stated goal of establishing a replacement plan that minimizes market impact. Both ARRC and ISDA have consistently demonstrated a strong grasp of the differences between LIBOR and SOFR along with what, practically, will be required to transition. They are both cognizant of the inherent difficulties in choosing a methodology that will have valuation impact and therefore lead to winners and losers on some level for each outstanding agreement. Once a fallback protocol is chosen for new derivative contracts, the amount of outstanding legacy LIBOR notional will begin to roll off, naturally lessening the importance of legacy contract modification as time passes. This potential scenario points to LIBOR lasting much longer than the proposed 2021-deadline. Plans for structured products will likely fall into place as SFIG takes its cues from ISDA and ARRC, adopting similar strategies on the road to LIBOR replacement. Perhaps LIBOR will not end with as quick a bang as some have speculated, but with a slow whimper as people allow the market to naturally adjust. In any case, we continue to watch the unfolding events closely and stand ready for whatever the future may bring.