On January 27, 2019, President Donald Trump signed a stopgap bill to fund the federal government for three weeks. The bill ended the longest government shutdown in history, which kept 800,000 federal employees out of work for an unprecedented 35 days and shuttered most federal agencies. The prolonged shutdown was the result of partisan gridlock over $5.7 billion in proposed federal funding for a wall at the southern border of the United States. With political tension between Republicans and Democrats seemingly at an all-time high, the risk of future government shutdowns remains elevated. This “new normal” negotiating tactic can have profound effects on our economy and financial markets. In this piece, we examine the impact of the most recent shutdown, specifically on the U.S. structured credit markets. We also analyze the potential risks in these markets should an even longer shutdown occur at some point in time.

As December 22nd crept closer with no federal budget deal in sight, it became apparent that the country was approaching a government shutdown. However, few could have anticipated a five-week long shutdown that had major negative economic effects for the entire nation. While the shutdown’s exact toll on U.S. economic production for 2019 remains unknown, the Congressional Budget Office (CBO) estimates the five-week impasse pushed real GDP lower in the first quarter by $8 billion. While most of the real GDP lost over the shutdown period will eventually be recovered, the CBO estimates that $3 billion will be permanently lost.

While the shutdown had an impact on the U.S. economy that grew in significance with each passing day, the financial markets took things in stride. In fact, both the Dow Jones and S&P 500 indices rallied over 10% during the partial shutdown period. Likewise, the structured credit space saw spreads tighten during the first few weeks of January as markets gradually retraced December’s risk sell-off. Despite credit spreads remaining largely stable for most of January, the shutdown did present operational issues for structured credit markets. These issues could potentially cause significant ripple effects throughout the markets should another even longer shutdown occur in the future.

For one, the shutdown prevented several government agencies from guaranteeing and/or funding loans. The reverse mortgage market saw loan guarantees grind to a halt when the Federal Housing Administration (FHA) announced a cessation of endorsement for Home Equity Conversion Mortgages (HECMs). January data showed HECM endorsements down 5.8% on the month and, given the accumulation of endorsements that built up over the shutdown period, it seems the earliest we could hope for a “normal” month of volume would be March. 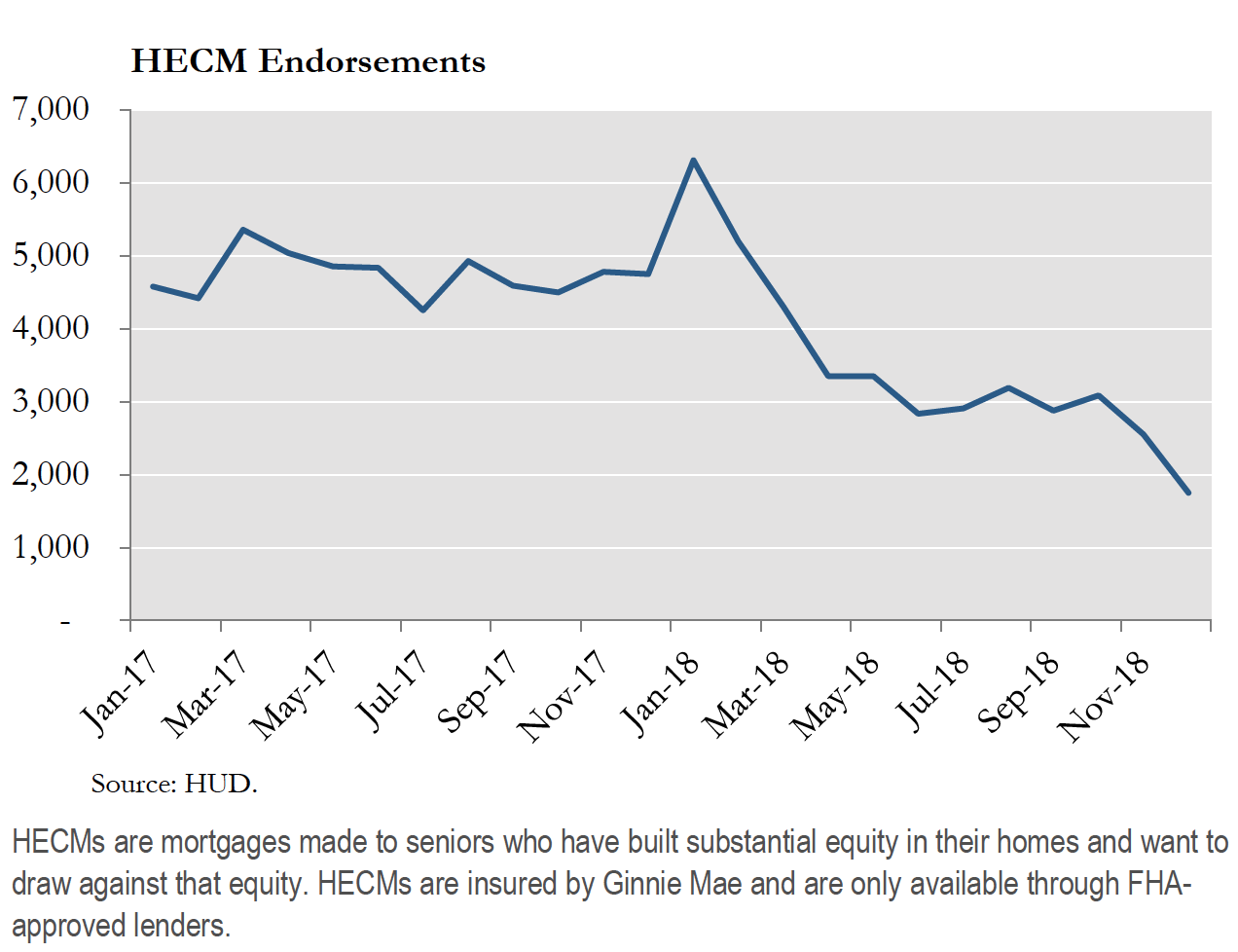 The Small Business Administration (SBA) was incapacitated during the shutdown, seeing its backlog of loan applications balloon during the period. The SBA serves as a critical source of funding for small and midsize businesses, as it partially guarantees loans from approved lenders at affordable rates. The SBA was unable to approve new loans during the shutdown, effectively locking small businesses out of the $117 million in daily capital provided by the administration. While the considerable pipeline of SBA loans approved prior to the shutdown should ensure February and March securitizations will remain on schedule, time spent working through the backlog should prolong the deal approval process in the coming months with the full effect yet to be known.

Not all government agencies were as negatively affected, though. Ginnie Mae project loan origination and secondary market spreads, for example, remained mostly stable during the shutdown as the agency remained open for business. Furthermore, federally-guaranteed student loans saw little change, as the Department of Education was already funded under prior legislation and the guarantor agencies that directly pay FFELP loss claims were not touched by the shutdown. However, losses on federally guaranteed student loans could potentially pose an issue to bonds backed by such collateral in the future should a shutdown occur when the Department of Education is not fully funded.

Additionally, the shutdown impacted U.S. economic data that is utilized by virtually all market participants. The timing of the recent shutdown proved somewhat fortunate on a data front given the light economic calendar but still resulted in notable disruptions to the collection and release of key economic statistics. Federal agencies tend to accelerate reporting in December in an effort to get most information out before Christmas. Consequently, key releases like GDP, personal income and spending, and durable goods orders were published prior to the start of the shutdown. Similar to the Department of Education, the Labor Department had already received its funding for fiscal year 2019 so the monthly employment report and Consumer Price Index (CPI) were compiled and released on schedule. However, with the Commerce Department among the Cabinet agencies closed during the shutdown, data series produced by the Census Bureau and Bureau of Economic Analysis were delayed. Key reports generated by these data producers include Retail Sales, Housing Starts, and New Home Sales.

Although the actual effects of the shutdown were more operational in nature this time, it became clearer how the structured credit markets could suffer should a similar, more severe episode ever occur. With 800,000 federal employees furloughed and consequently not collecting a paycheck for the period, performance among consumer borrowers had the potential to deteriorate meaningfully during the shutdown period. Consumer lending, credit card, and auto loan securitizations, to name a few, stood to show an uptick in delinquencies as federal employees struggled to make ends meet absent a regular paycheck. However, performance deterioration in these deals was mitigated this time around, mostly due to lender/servicer relief to federal employees affected by the shutdown. Several banks, including Wells Fargo, JP Morgan, and Bank of America, alleviated federal worker responsibility during the 35-day period by waiving overdraft/other fees, allowing customers to break certificates of deposit early, and/or offering low rate loan programs.

JP Morgan estimates that for each week the federal government is shut down, quarterly annualized GDP growth is reduced by 0.1-0.2%. This is particularly concerning as, given the lack of compromise recently exhibited by both parties, there is no telling how long it would take Congress to come to agreement on a federal budget in the event of another shutdown. Despite having a relatively benign impact on structured credit markets this time around, another prolonged period without pay for federal employees could result in a material spike in delinquencies/defaults on consumer loan products. There is no guarantee that banks will continue to offer the same flexibility if shutdowns continue to increase in frequency and/or length. Delayed economic data releases could have adverse consequences for market participants, especially given the current division in opinion on future economic output. So far spreads and fundamentals have remained resilient despite the political turmoil, but a second shutdown in such a short time span could prove to be the straw that breaks the market’s back. As we move forward, we will continue to keep a close eye on the political rancor in Washington D.C. and the impact that it can have on our structured credit portfolios.