As the U.S. economy continued to strengthen in 2018, the Federal Reserve raised its benchmark interest rate four times. With the market pricing in additional future hikes, interest rates rose throughout the year, culminating with the 10-year U.S. Treasury yield reaching 3.24% in November, a level not seen in over seven years. The steady march higher in rates ended abruptly, however, as the equity and credit markets faltered in the fourth quarter. Although the Federal Reserve raised its benchmark rate during its December meeting, they simultaneously lowered the number of projected hikes for 2019 from three to two, signaling to the market they would soon pause their monetary tightening campaign. After January’s meeting, at which the Federal Reserve left rates unchanged but issued some very dovish language, interest rates fell, with the 10-year U.S. Treasury yield rallying to a yearly low of 2.37% in late March. With no signs of returning to last year’s rate environment anytime soon, the structured credit markets must adjust to the relatively sudden drop in rates of almost 90 basis points. In this piece, we explore these potential impacts, from increased prepayment speeds to the effects on housing and investor preference for fixed-rate bonds.

The effects of lower interest rates on the structured credit markets are far-reaching, with both direct, observable effects and indirect, secondary ramifications. The most obvious impact is on mortgage prepayment rates. A sudden interest rate move of this magnitude can shift many borrowers “into-the-money” in terms of refinancing their current mortgages. Similarly, the rate move can have an indirect positive impact on home prices as lower prevailing mortgage rates improve the affordability of housing. Depending on the specific type of mortgage asset, these can be either positive or negative events for the bondholder. Lastly, the lower rate environment can impact investor preference for fixed-rate over floating rate debt, changing supply-demand dynamics and thus pricing in the markets. 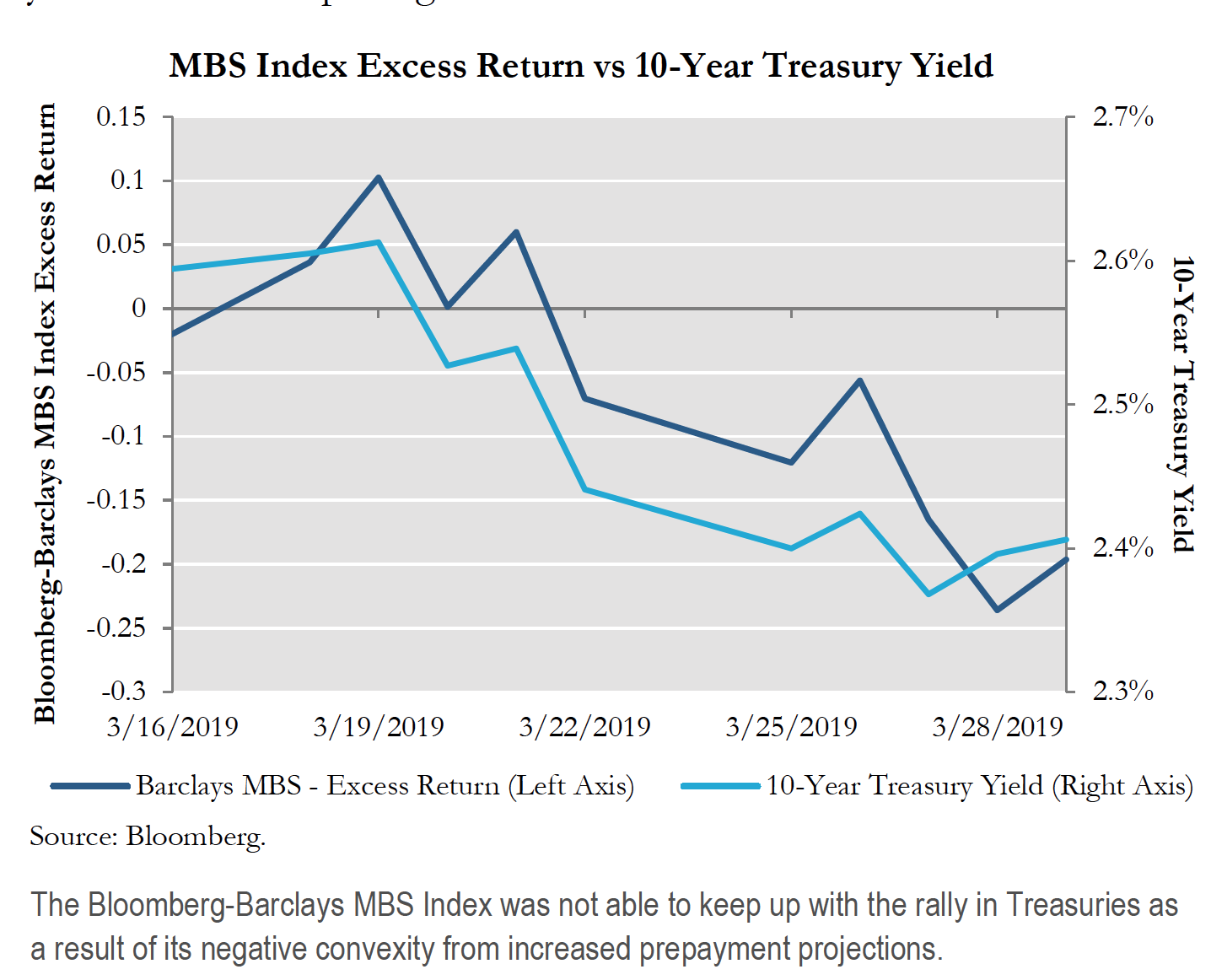 Home refinancing, as measured by the Mortgage Bankers Association’s Refinancing Index, jumped 39% in the last week of March. This was the highest level of the index since late 2016. Given the unfavorable impact of faster prepayments on agency MBS, especially the extremely negative convex premium TBA cohorts, the Bloomberg-Barclays U.S. MBS Index widened dramatically versus Treasuries in the second half of March. While many of the Index constituents suffered as a result of increases in refinancing, the specified pool market rallied, as the loans in these bonds offer various forms of protection from an increase in prepayment speeds. These levels of protection vary as a function of various factors, including geography, credit score, loan balance, and others. Low loan balance specified pools, with a maximum loan amount of $85,000, offer some of the strongest protection against faster prepayment rates. Low loan balance Fannie 4.0% specified pools, for example, appreciated in price almost one full point in the second half of March while their equivalent TBA cohort only increased by half of that amount, highlighting the benefit of slower speeds in a rally.

In addition to the specified pool market, the legacy non-agency RMBS market should also gain in value from the interest rate move, albeit for their faster, rather than slower, prepayment speeds. A large portion of the legacy non-agency RMBS market trades at a sizeable discount to par due to the fact that they are loss-taking securities. To the extent that non-delinquent borrowers in a security prepay their loans faster, they shorten the duration of the asset, thus increasing the bond’s price for a given constant spread. With the 30-year conforming mortgage rate hovering slightly above 4.0%, a large portion of legacy non-agency RMBS loans have now moved “in-the-money”, especially within the prime sector. 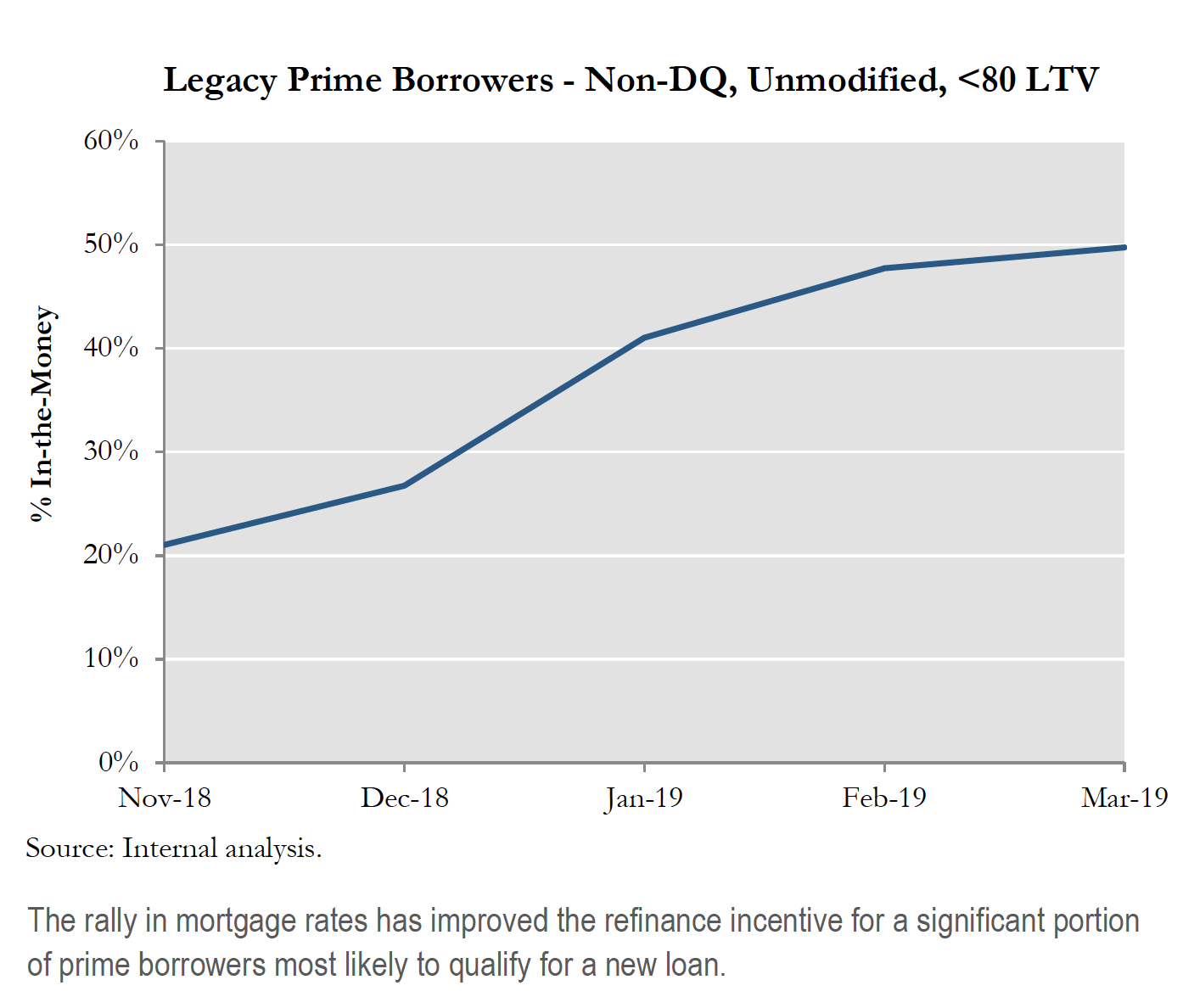 We performed a simple analysis to determine the percentage of legacy loans that currently have a positive incentive to refinance. We isolated the population of legacy non-agency RMBS borrowers who were current on their mortgage, have never had a loan modification, and currently have a loan-to-value (LTV) ratio below 80%. Although current jumbo mortgage rates are below conforming rates for high credit borrowers, we added 25 basis points to the prevailing conforming mortgage rate to conservatively approximate the mortgage rate for legacy borrowers, many of whom have non-conforming loan sizes. Using this rate, the percentage of prime borrowers fitting the criteria who are now in-the-money jumped from 21.0% in November 2018 to 49.7% as of the end of March 2019. Although for these purposes we ignore many complexities surrounding the decision to refinance (for example, borrowers in such seasoned loans may be hesitant to extend the term of their debt even further), the general picture concerning incentive to refinance is clear. 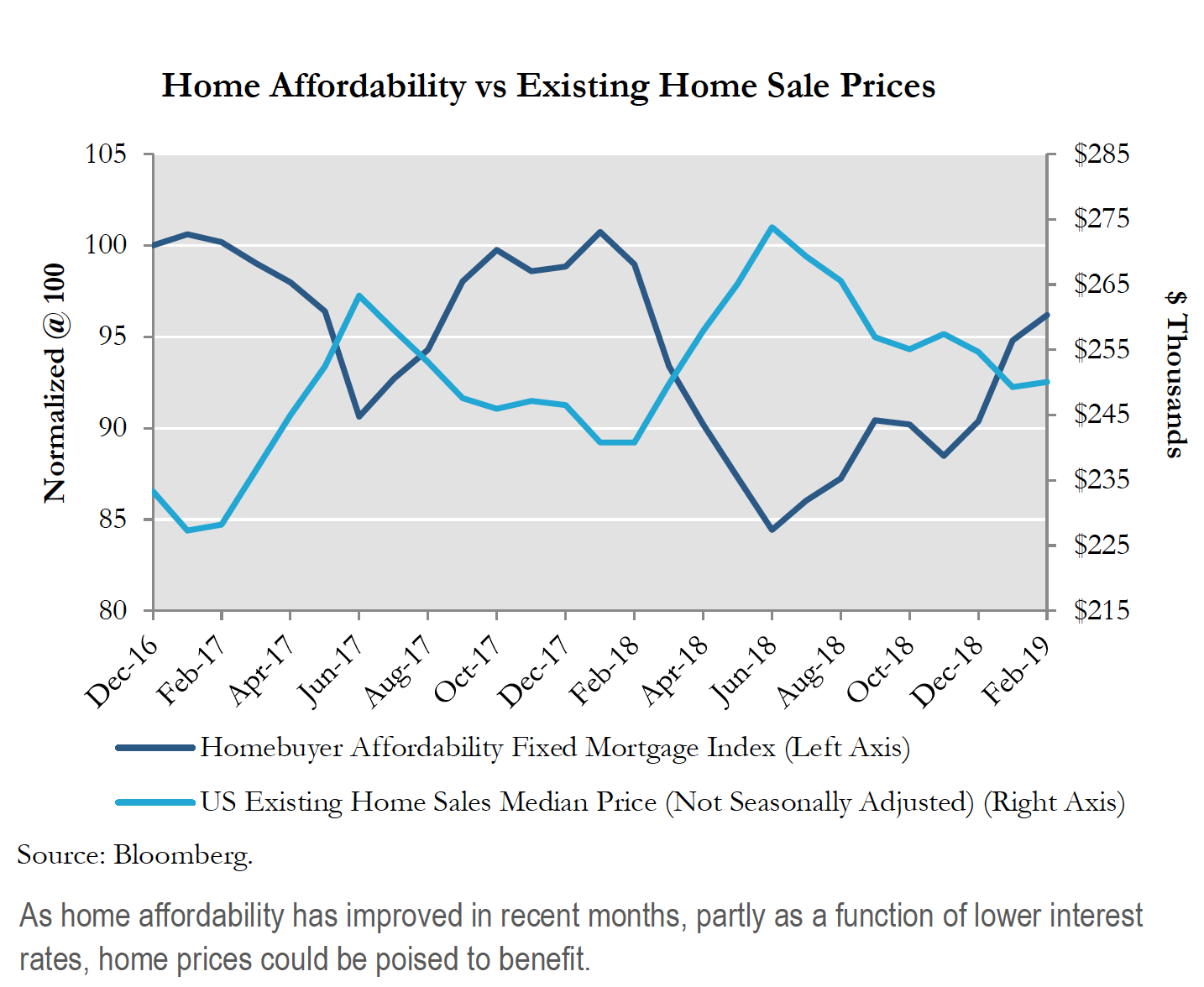 In addition to prepayment speeds, lower interest rates also serve as a catalyst for home prices. Beginning in the second half of 2018, the U.S. housing market has come off its peak. The median sale price of an existing home hit a yearly high in June 2018 at $273,800 before gradually falling to $254,700 by year-end. Although seasonal effects played a role in the absolute price decline, the rate of home price increases has fallen on a year-over-year basis. While there are a variety of reasons for this price decline, including the Tax Cuts and Jobs Act, which limited the mortgage interest deduction, higher mortgage rates also played a role. With mortgage rates hitting a 7-year high of 4.94% in November, the average monthly mortgage payment in 2018 was approximately 23% higher than it was in 2016. However, this trend has reversed course so far in 2019 as mortgage rates have plummeted. As of February, the National Association of Realtors’ “Homebuyer Affordability Fixed Mortgage Index” has improved by approximately 14% since mid-2018. This does not even take into account the large interest rate rally experienced in March, as the affordability index is subject to a lag.

A stronger housing market benefits the non-agency RMBS sector in several different ways. Although most legacy non-agency RMBS borrowers, especially the prime and alt-A sectors, have significant equity in their homes at this point in time, a small portion of borrowers have high LTV ratios. Approximately 3% of these current borrowers have LTV ratios greater than 90%, meaning any improvement in home prices lowers their future propensity to default. Furthermore, as borrowers are able to lower their LTV ratios, they raise their probability of qualifying for a new mortgage, which could also improve prepayment speeds. Finally, loans that are liquidated out of the delinquency pipeline should have higher recovery rates if they can take advantage of higher home prices.

With higher potential prepayment speeds and a stronger housing market bolstering the fundamentals of the non-agency RMBS landscape, the sector should see renewed interest from market participants. However, the sector, like a large portion of structured credit assets, has lagged the recovery seen in other credit markets. One potential reason for this underperformance could be investor preference for fixed rate securities in the current environment. Given the high percentage of floating rate bonds within structured credit, investors who wish to take some kind of forward dovish rate view naturally shift toward fixed rate bonds. We have seen this pattern in prior dovish markets; it was not until the large interest rate sell-off in late 2016 and subsequent sell-off in 2018 that floating rate non-agency RMBS really seemed to catch a strong bid in the market.

The recent interest rate rally presents a compelling opportunity for legacy non-agency RMBS. While other areas of the mortgage market suffer as a result of negative convexity, the fundamentals of non-agency RMBS have improved. With many yield-driven buyers on pause, the securities look attractive, especially on a spread basis within the new interest rate regime.