Auto Lending: What to Make of the Recent Increase in Delinquencies?

In the years immediately following the 2008 financial crisis, the availability of consumer credit tightened dramatically. As a result, the personal balance sheet of the average American improved as consumers were forced to de-lever in the absence of financing options. However, while mortgage credit issuance, the largest form of consumer credit, came to a virtual halt immediately after the crisis, auto lending remained elevated. A recent increase in auto loan delinquencies has caught the eye of many in the structured credit investor community. Does this portend a significant pullback in consumer credit or is it a small, explainable blip in an otherwise strong economy? In this piece, we examine the history of auto lending in the post-crisis era as well as examine the potential reason for the elevated delinquencies.

Interestingly, auto delinquency rates did not increase to levels anywhere near mortgage delinquencies during the financial crisis. Many borrowers, in dire financial conditions at the time, simply made the decision to continue to pay their car loans over other forms of consumer credit, including their mortgage payments. While counterintuitive at first, the decision is actually very rational. In many parts of the country, cars are a necessity for everyday life, including commuting to and from work. Without a car, many would not be able to maintain a job. Unlike homes, cars can be quickly repossessed if a borrower falls seriously behind on their payments, leading borrowers to prioritize those payments over others.

The relatively stable performance of the sector is one reason that issuance remained robust in the post-crisis era. Auto loan origination has grown to a $1.3 trillion market in recent years, up from $800 billion immediately preceding 2008. This growth has been partially fueled by an influx of private equity capital, as buyout firms poured billions into subprime auto lending in an attempt to capture profits from the sector’s high interest loans. For example, Blackstone invested almost $500 million in Exeter Finance, a subprime auto lender operating in all 50 states, beginning in 2011. Subprime auto loans (defined as borrowers with < 620 FICO scores) and deep subprime (loosely defined as a subset of subprime borrowers with <580 FICO) now make up 20% of the market. Auto loans are typically originated through two main channels – banks/credit unions and auto-finance (non-bank) companies. While a large portion of the loans are kept on balance sheet, approximately $60 billion are securitized and syndicated to investors each year.

Delinquencies in the sector began to pick up in late 2014 and have continued to steadily increase. According to recent dealer research, over 7 million borrowers are currently more than 90 days delinquent on their auto loans. To put this in perspective, only 1.5 million borrowers were at the same level of delinquency in 2000. Even adjusting for the increased amount of loan volume today, the rate at which borrowers are going delinquent is over two times higher than it was at the beginning of the century. In fact, the overall auto delinquency rate is only approximately 0.5% lower now than it was at its peak in the years immediately after the financial crisis. 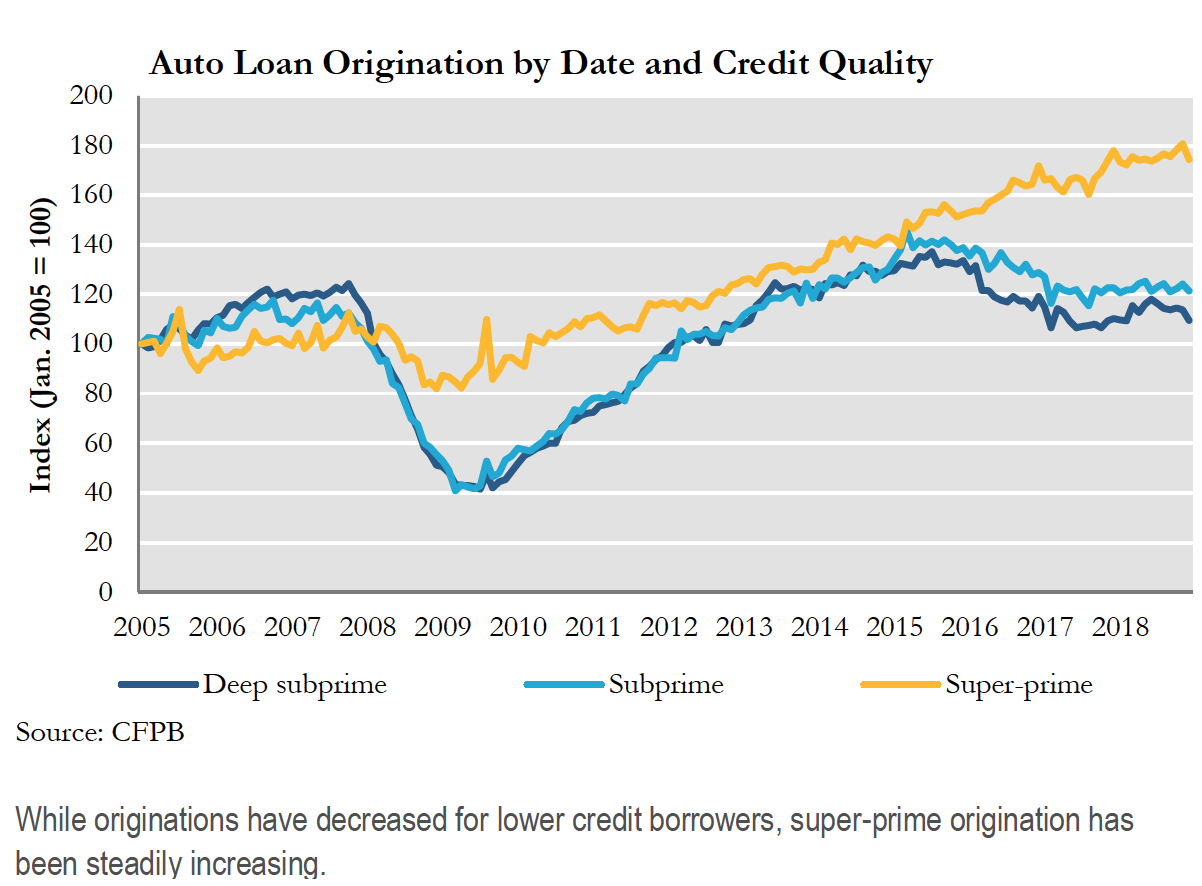 Not surprisingly, these elevated levels of delinquency have led to concerns about consumer credit in general. Is the auto loan sector a harbinger of what is to come in other areas of structured credit? As of now, the answer appears to be no. The data simply does not indicate any large scale pullback in overall consumer performance. Outside of a small increase in credit card delinquencies, consumer performance has actually remained quite strong. In fact, mortgage and student loan delinquencies have actually fallen over the last several years.

Instead, the rise in auto delinquencies can be attributed to one particular pocket of the market. Subprime and deep subprime borrowers, specifically those originated through auto finance companies, are responsible for most of the recent uptick in delinquencies. The performance of prime borrowers has remained extremely stable, with originations actually growing in recent years for very clean, super-prime borrowers. 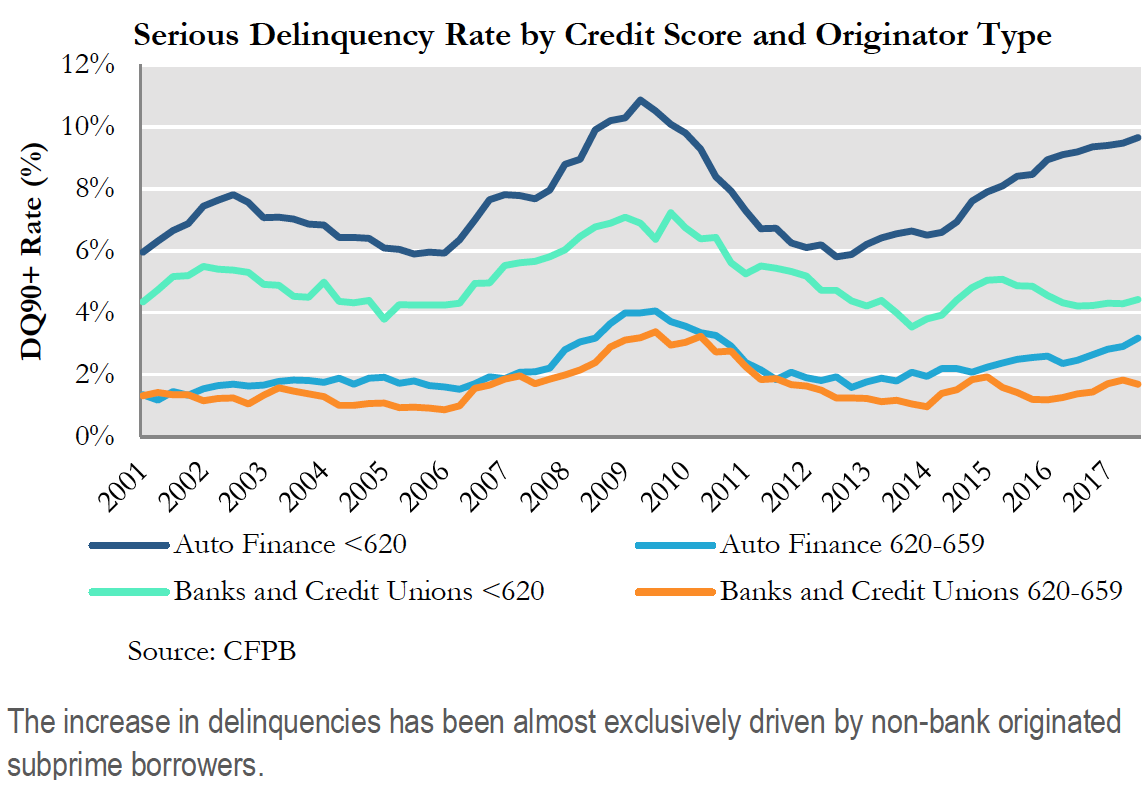 Although performance has recently stabilized for lower credit borrowers, the market has already felt significant effects. Several non-bank auto finance companies, such as Summit Financial, have filed for bankruptcy, while others, such as Pelican Auto, have halted originations. Many other non-bank originators, including Spring Tree and Honor Finance, have faced various types of financial difficulties. However, as more non-bank originators who catered to the low credit segment leave the market, overall lending standards have become tighter, which benefits the performance of the sector as a whole.

While the downturn in lower credit auto performance had serious implications for non-bank originators, the impact on securitizations was minimal. For one, only around 15% of subprime auto origination is in securitized form. While those deals had high loss rates, they also had significant excess spread from high interest rates on the loans that provide additional cushion against losses to bondholders. 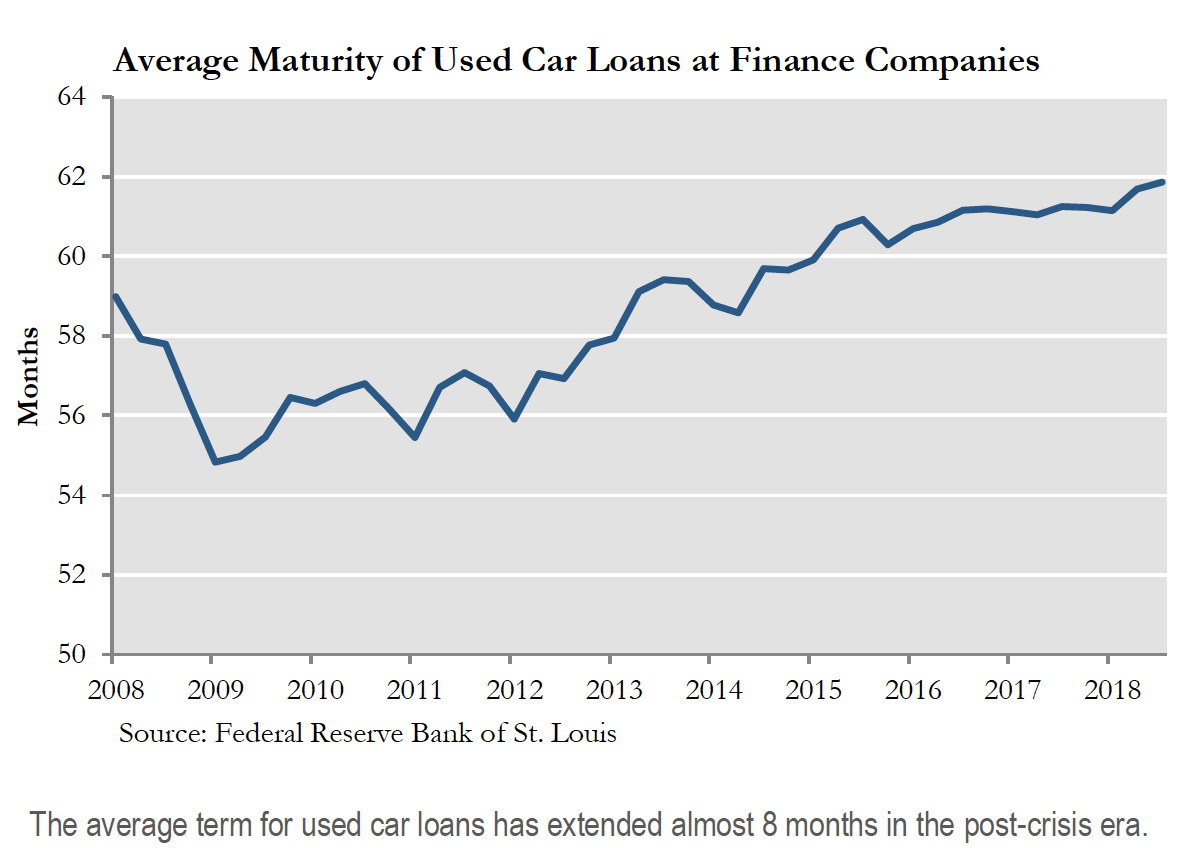 Although these bonds have layers of loss protection mechanisms, we still believe investors should take caution, especially with regards to the term of the underlying loans. Even as the credit box has tightened in terms of borrower credit quality, loan terms have gradually increased. These increased terms could pose a problem, especially in light of the aged vehicles backing the loans. Regardless of borrower credit score, this mismatch between loan term and the lifespan of the associated vehicle should be a focus of investors going forward.

U.S. consumers remain the beneficiary of a tight labor market and wage growth. While the elevated levels of auto delinquencies in recent years are concerning, they appear to be the result of lenders overextending credit to borrowers who simply should not have received a loan in the first place. This overextension and subsequent pullback of credit is typical within a market and appears to have been righted without serious consequences reverberating through the economy.